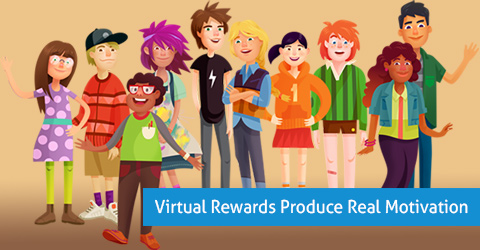 Motivation for Tutoring with Virtual Rewards

Virtual rewards for tutoring? Well, every culture has its own currency which it trades for the things its citizens prize or need. As a result children, especially when tutoring, are no exception. So, consider providing motivation for tutoring with virtual rewards.

That is to say that us adults attach value to dollars and cents. However younger children ascribe as much value (or more) to the things they treasure most. Most importantly, these are often items which are non-monetary in nature. In days gone by, that might have been marbles or baseball trading cards.

Today, it’s more likely an avatar for their favorite video game, a digital pet, or some other status symbol in their own realm. Hence virtual rewards. You can even get your child their own “digital license“. For example, a driver’s license of sort for navigating the Internet that rewards them for their understanding of potential risks online.

Researchers are studying the effects of incentives on learning, especially short-term incentives. Consequently, suggesting how best to leverage these non-monetary things kids value most. Thus making these programs more cost-effective for schools and districts to administer. Above all, it’s how to motivate students to learn, reward them for their efforts, and in the process, boost attendance and retention levels in tutoring.

What Do We Want?  Motivation. When Do We Want It? Now.

on some roughly 6,700 students in the Chicago, Illinois area. By announcing the incentives immediately before the tests were administered, the researchers eliminated the effects of preparation on performance. By modifying the rewards as either available immediately after taking the test or one month later, they could study which scenario—long-term or short-term—is most effective.

Although the effects varied by student body demographic, whether due to age or economic strata, the researchers were able to demonstrate that:

The takeaway from the study for using virtual rewards for tutoring is that short-term incentives work. More importantly, something as inexpensive as a digital reward can incentivize students. Additionally, this is easily dispensed and controlled, and affordably obtained.

This isn’t exclusive to students. Your own employees can find incredible motivation from the right types of incentives.

Find out how Oases Online can add value to your tutoring business by booking a demonstration below. The Importance of Summer Tutoring